People were pissed when Tiger & Bunny ended, the when it was announced that there would be more? Peeps rejoiced! The masses were happy again! There will be a Tiger & Bunny movie! The Suzuka Theater in Japan of the Warner Mycal Cinemas chain made the announcement of the release date for this Tiger & Bunny movie.

The movie is entitled Gekijo-ban Tiger & Bunny – The Beginning, premier is around Sept. 22nd. The information was a mistake that was noticed courtesy of their adv. tickets sales page. The theater promptly removed the information once they were alerted to the error. However, it does reflect like a legitimate date. It was report Mid-Dec 2011 when Sunrise first announced the 2 confirmed movies we knew they were shooting for a Sept release.

I know that all of us T&B Fans are excited about this news, and for those that haven’t seen Tiger and Bunny? I suggest highly if you’re into super heroes and mecha? This series is not only one for you, but the movie as well and I can say w/o a shadow of doubt that there will be those that do JUST that after seeing this series.

On Tuesday, the world of otakudom suffered a great and tragic loss we have lost legendary director Noboru Ishiguro. Irony is a cruel mistress indeed as it also marks the thirtieth anniversary of the Ishiguro-helmed The Super Dimension Fortress Macross: Do You Remember Love?, which will not only FINALLY come on Blu-ray at the beginning of the 3rd quarter tentatively July 26 along with a plethora of bonus behind-the-scenes materials, bonus discs, a pencil sketch booklet. It’s a good way to go to remembering Ishiguro-san to celebrating his greatness that is Macross! We see on bridge our Captain Ishiguro of the SDF-01 and we salute you as you and The Fortress go off to defend our Otakuverse, BE FORVER NOBORU SENSEI! BE FOREVER!

My mainboard is defunked and has lost a sata port on the board itself, one the 320 gig drives died but I am having it RMA’ed for a sata replacement instead of the IDE the original one was, so I have a complete sata setup but a board that’s messed up. So I’m pulling the Video card, the 4 gigs of Ram and bagging them up and letting them sit on the shelf till I can afford a new mainboard. One that has 4 sata ports on it and 4 ram slots.

Girl Scout cookies are almost completely sold finally; I don’t think I’ll be doing that again though. Still have a case of Samoas still in the living room as well as a case of trefoils. -_-; we should have them sold soon enough though however. The month of March just suck plain and simple and I just need to have some good things go my way this time. OH! And this was just icing on the cake, on that same Tuesday, I got to find out that my blood sugar was over 300 “300” how!?! Well let’s see I gained 10 lbs. in a month and a week and I’ve been drinking Mello Yello and cup of noodle. I think that might have some serious contributions to it. So, it’s back to green tea and light eating again it seems. Hopefully my blood sugar will be back to normal by next Tuesday.

With it being my wife’s Birthday coming up at the end of next week, not much to report on. Cool Kids Club will be airing twice a month instead of once a week, we have done some promo spots, and we’re going to have some special guests coming up in late spring early summer. So please feel free to tune zone out and listen to 4 guys and a Gal talk about anime, technology manga and sometimes out in left field completely

Currently at work, on break so don’t get up in my grill. Weekend “sucked” 250 gig Sata Hard drive died just after doing an image backup of it, thank god I was able to do that much at least this time. So, I worked on it had about 4+ hours of sleep since Friday IM’d a few peeps on tech support *off the click* to maybe see about getting an extra pair of hands to help guide me where I might be going wrong on the restore.

Restore wasn’t restoring as it should have been. No reason either to explain the incident. Image verified as clean, BCD/Bootable according to the hard drive after restore, I even went to the bios and told it that it was safe to boot from the hard drive again. Still Disk Failure insert a system disk press enter. After about 7 hours of testing and diagnosing I placed in a support ticket out of frustration and sheer stupidity on my part. But Darren was cool about it and just said bring in today and we’ll test it out to see what is going on with it.

So, currently while I’m at the front desk, the OS backup image is being re-verified so I don’t look like some crazy nut that is off his rocker. Maybe the logs will show tier 2 something that I didn’t see or had passed up not seeing it for what it was? In either way I am hoping that the system will be restored and operational by the time I get off work to take care of the house and other daily duties that await my after work hours as well. 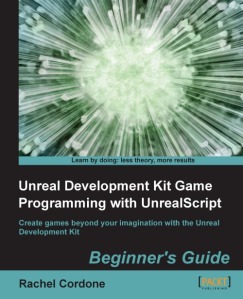 First off, let me say what a great privilege this is to have been able to do a read through and apply the lessons that are in the chapters and the explanations and how they work.  I thought at 1st this was going to be a tedious tasking, being someone who dislikes having to use mathematics in programming. Being someone with a slight learning curve, Ms. Cordone AKA AngleMapper to the unreal community brings programming with UDK fun for the new user.

I was asked to review a particular chapter of the book, and sadly I cannot. Why? Because the whole book itself is a great read and learning tool to those that are starting out and have questions on how the inner working of UDK work and are applied within each other. The hands on examples are great as you can apply them to your own alpha as you’re building your game and its environment. About ¼ the way thru the book I got to the awesome actor section and was always curious on how the actor/model stood on the floor without going halfway through it which was always something I beat my head against.

But after reading through that particular section I was able to understand and wrap my head around it. I finally knew the values and how the rotation worked without the headache I would end up giving myself in the end in frustration. All in all for Ms. Cordone’s Guide to UDK I for one am giving this book a 9.5 out of 10 for aiming towards the little guy and addressing issues some of us out here with learning curve issues and helping us grasp and understand the concepts and learning from them at that angle. I thank Rachel and Shaveer for this great opportunity it is a pleasure finally to grasp things that seemed more complicated than they actually are. You can order this informative and enjoyable guide to programming in unreal at Packit Publishing again I wish to thank Rachel and Shaveer for this oppertunity. It has been enlightening to say the least.

Madarame seems to have peeps.

philosophic topics and the arts

because anything is possible with Charisma

1001 video games and beyond

conversation's deep, when you talk to yourself...there's no way to cheat...cause you know you can't be no one else...

Defenders of Anime, Manga and Video Gamers of The Universe

Inspiring, Encouraging, Healthy / Why waste the best stories of the World, pour a cup of your favorite beverage and let your worries drift away…

Passionate about cooking and baking and love to share.

Cultural Critique, Art and The Musings of a Moral Mad Scientist

A Focus on Podcasting Technology for Education

Tales of Mystery and the Supernatural